The U.S. Drought Monitor is reporting that All drought categories expanded across parts of Texas, resulting in Exceptional Drought covering virtually all of the Texas panhandle. The U.S. Department of Agriculture (USDA) reports indicated that 78% of Texas and 72% of Oklahoma topsoil was short or very short of moisture.

The good, bad, and dried out realities of Texas’ water supply – A one year comparison of Texas Lake Levels

Rather than bore you with all the humdrum, we decided to let the graphic speak for itself.

Lake Conroe is officially “full.” At approximately 11:30 A.M. on Tuesday, May 13th, the water elevation of Lake Conroe reached 201.00 feet above mean sea level. This is the first time that Lake Conroe has been at full pool elevation since April 25, 2010.

The following are a few key points regarding the Lake Conroe conditions: 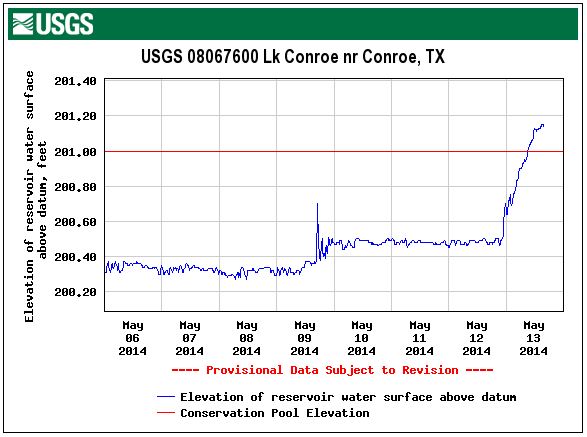 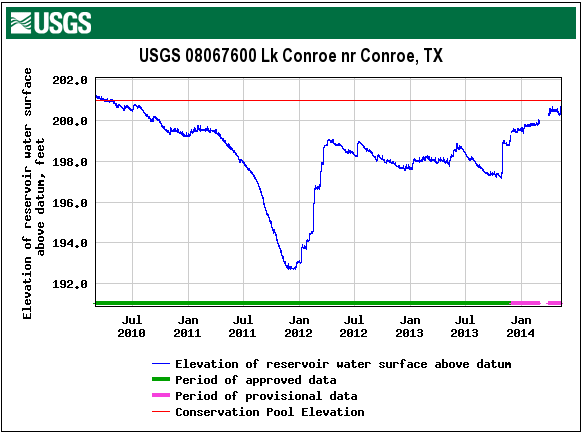 Texas Panhandle communities may run out of water in 90 days

Water: we drink it, we swim in it, we need it for every day life. But now state leaders are urging you to do more, conserve it.

“Overall, our average reservoir level is about 64% state-wide,” Texas Agricultural Commissioner Todd Staples said. “But in the South Plains and in the Panhandle, it’s much worse in West Texas than it is in other parts of Texas. And that’s why we all need to do our part.”

The South Plains is under extreme drought conditions. And in the state, more than 85 percent is parched. Communities in danger of running out of water are those that get their water sources from dried up lakes. Lake Meredith and White River Lake are at 0 percent full. Lake J B Thomas is only at 1.1 percent. Many of these communities may run out of water in just 90 days.

“We are working on those solutions, there’s some options out there. But at the end of the day, it has become the real problem of the day. Talking about if it’s going to get here, it’s here,” State Representative Charles Perry said.

The Texas Water Smart Coalition is challenging Texans to step up their conservation efforts. Perry said if everyone saves just 20 gallons per day, it can add up big time.

“That adds up to almost 90 million gallons over the course of the year in Lubbock alone,” Perry said. “We use about 25 million gallons a day during the average. 10 percent is 2.5 million a day.”